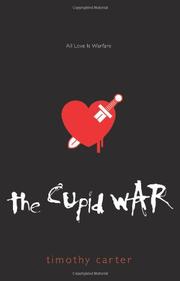 Fallon actually planned to off himself. He was on the Pape Street Bridge ready to jump because his girl dumped him, his dad was a prick and his “best friend” Susan was the most clingy, depressing person on the planet. He changed his mind…and slipped. Fallon wakes to find Bud, a Soul Reaper, ready to take him to—his new job. Souls with Karma to work out become Cupids, genital-free, Love-eating spirits who exist to increase the supply of Love in the world by getting the living to couple-up. Fallon’s new boss Louis is a huge jerk. Bad enough that he’s got to suffer that (and the heart-emblazoned spandex), but, with little training, Fallon also has to avoid Suicides, the dangerous, misery-eating antitheses of Cupids. When he finds Susan has attached herself to a new unfortunate, Fallon suspects there’s something more than meets the eye to that downer-girl. Can he save her new target (and maybe the world)? Carter’s newest is a darkly humorous, fantastical frolic. Fallon’s snark is tempered by his conflicted feelings about his runaway mother. Other characters aren’t as well-rounded, but the unique afterlife and a surprisingly spiritual twist will keep pages turning.

Fans of funky unconventional fantasy will lap it up and roar for more.