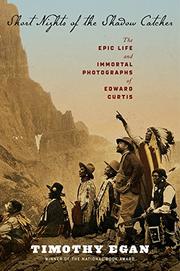 SHORT NIGHTS OF THE SHADOW CATCHER

The Epic Life and Immortal Photographs of Edward Curtis

This is an era of excessive subtitles—but not this one: “Epic” and “immortal” are words most fitting for Curtis, whose 20-volume The North American Indian, a project that consumed most of his productive adult life, is a work of astonishing beauty and almost incomprehensible devotion. Egan begins with the story of Angelina, Chief Seattle’s daughter, who in 1896 was living in abject poverty in the city named for her father. Curtis—who’d begun a Seattle photography shop—photographed her, became intrigued with the vanishing lives of America’s Indians and devoted the ensuing decades both to the photography of indigenous people all over North America and to the writing of texts that described their culture, languages, songs and religion. Curtis scrambled all his life for funding—J.P. Morgan and President Theodore Roosevelt were both supporters, though the former eventually took over the copyrights and sold everything to a collector during the Depression for $1,000—and spent most of his time away from home, a decision that cost him his marriage. His children, however, remained loyal, some later helping him with his project. As Egan shows, Curtis traveled nearly everywhere, living with the people he was studying, taking thousands of photographs. He nearly died on several occasions. Egan is careful to credit Curtis’ team, several of whom endured all that he did, though, gradually, he became the last man standing, and he reproduces a number of the gorgeous photographs.