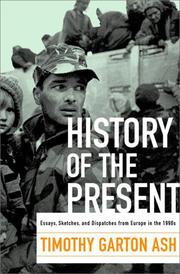 HISTORY OF THE PRESENT

Essays, Sketches, and Dispatches from Europe in the 1990s

Ash (The File: A Personal History, not reviewed) acts as informed, impassioned eyewitness to post-communist Europe in this collection of dazzling essays, most of which were originally published in the New York Review of Books.

Following the "velvet revolutions" of 1989, Germany, Poland, the Czech Republic, Slovakia, Hungary, and the Balkans engaged in the hard work of nation-building (or rebuilding). In a kaleidoscopic treatment that combines journalism's immediacy with history's perspectives, Ash recounts the leaps and stutter-steps these countries took toward liberty and prosperity, as well as their unexpected reversals: old allies' quarrels, lapses into complacency, or, worst of all, descents into anarchy and barbarism. In Prague, he chronicles the explosion of "color, noise, [and] action" unleashed by new-found freedom; in Gdansk, he views the "head-high weeds [and] rusting hulls" of the former Lenin Shipyard with Lech Walesa, who rose to leadership of the Solidarity movement here. He visits former East German dictator Erich Honecker, dying of cancer in prison; discusses friend Helena Luczwo, once the sparkplug of a Polish underground newspaper, now deputy editor of the most successful newspaper in post-communist Europe; and offers a glowing appreciation of Pope John Paul II, "the greatest world leader of our times." While these profiles highlight Ash's eye for detail, other essays spotlight his bent toward moral inquiry. In "Trials, Purges, and History Lessons," Ash assesses how Central and Eastern Europe are addressing collaborators with communism. "Intellectuals and Politicians" takes issue with the contention of good friend Václav Havel, dissident playwright-turned-president, that intellectuals should enter politics in order to produce a "new wind" in public affairs. In four dispatches on Kosovo, he assails Western leaders for concentrating on monetary union early in the decade while ignoring Balkan tensions that culminated in Miloševic's "ethnic cleansing" campaign.

An invaluable contemporary account of how millions of Europeans have taken divergent paths—of compromise or conflict—in reaction to a decade of unanticipated change.