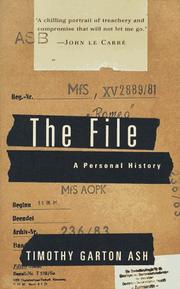 A British historian has the eerie experience of reading the secret file kept on him by the Stasi, the East German secret police, and meeting with those who informed on him and the police who were responsible. After the unification of Germany, the government made the unprecedented decision to open the secret police records to every person who is in them. It was an appallingly comprehensive archive. Ash (History/Oxford; The Polish Revolution, 1984) states that one out of every fifty adult East Germans had a direct connection with the secret police. The Stasi tracked him from the time that he first crossed the border as a young student. His file was 325 pages and included copies of his notes, photographed during a secret search of his luggage, and even copies of references written by his Oxford tutors. Those who informed on him included ``Michaela,'' who was also informing on her own stepdaughter; ``Schuldt,'' a middle-aged lecturer who made homosexual advances to his students; ``Doktor,'' an Englishman who was told falsely that he was suspected of being a Western spy; and a once-brave woman, a Communist who had set out ``to fight for a better world'' and ended as an informer. His confrontations with these figures are difficult (some are abashed, some defiant), fascinating, but rarely satisfying for Ash. He fares little better with the police he tracks down, including a ``perfect textbook example of the petty bureaucratic executor of evil'' and an unrepentant colonel, reeking of ``alcohol, cigarette smoke, boredom and emptiness.'' Few it seems, can face what they have done. In the files, writes Ash, is ``a vast anthology of human weakness,'' reflecting less deliberate dishonesty ``than our almost infinite capacity for self-deception.'' Sensitive, subtle, and illuminating, as a fine historian explores those infinitely complicated choices made by human beings confronted by the issue of collaboration or resistance. (First serial to the New Yorker; author tour)