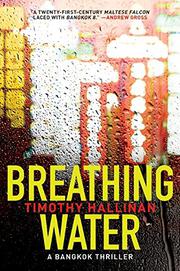 Half Filipino, half-American travel writer and unlikely action hero Poke Rafferty (The Fourth Watcher, 2008, etc.) once again gives in to his penchant for finding trouble on the streets of Bangkok.

Poke has it all: A smart, stunning Thai wife named Rose, an adopted daughter, Miaow, and a thriving career as an author and journalist. But Rose is no ordinary wife, having escaped the sleazy bar scene with Poke’s help and encouragement, and Miaow once cruised the streets as part of a gang of homeless kids. Now both are firmly family, but Poke’s tendency to keep digging in places he probably shouldn’t puts both his and their lives in jeopardy. His latest problem starts with a less-than-ordinary poker game involving his police friend Arthit and a legendary billionaire named Pan. Once a small-time thug, Pan used his considerable skills to turn himself into a tycoon. But Pan’s past is a source of both mystery and speculation, and writing Pan’s biography is the Holy Grail of Thai writers. Although past scribes who attempted this literary coup failed to deliver, Poke has an inside track: Pan agrees to cooperate with him, although the mighty man’s cooperation doesn’t come willingly. Soon Poke discovers that having Pan’s permission to delve into his underworld dealings doesn’t mean smooth sailing—in fact, just the opposite. There are also powerful people determined to stop Roke, even if that means killing his entire family and anyone who helps him. As Poke tries desperately to sort the bad guys from the good, a young friend from his past resurfaces, and Arthit deals with a personal tragedy that could destroy him. Hallinan’s prose will engage readers, but first they’ll need to overlook such small bits of silliness in the plot as a pig sty in an expensive mansion.

Never lags for intrigue as it interweaves the lives of Thai street children with a tale of political power gone bad.