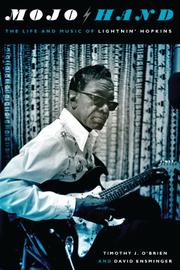 The Life and Music of Lightnin' Hopkins

Journalist Ensminger (Visual Vitriol: The Street Art and Subcultures of the Punk and Hardcore Generation, 2011, etc.) completed the work of his colleague O’Brien after the latter’s death in 2011. Singer/guitarist Lightnin’ Hopkins’ (1912–1982) prolific recorded output revealed one of the most distinctive of blues talents. Born Sam Hopkins into a rural sharecropping family, he began playing guitar at the age of 8, picking up his older brother’s instrument. He lit out from home early and was an itinerant musician by his teens, learning at the feet of legends like Blind Lemon Jefferson and Texas Alexander. He settled in Houston’s rough Third Ward; the ghetto neighborhood remained his home until he died. The trajectory of Hopkins’ career was similar to those of many of his blues contemporaries. After years of local renown, he recorded for a number of independent R&B labels in the late 1940s and ’50s. As the ’60s turned, he cut records for folk labels catering to the growing white folk-blues market; by late in the decade, he was playing Europe, colleges and the rock ballroom circuit. Hopkins’ enormous discography and improvisatory, stream-of-consciousness style led to his lionization before his death. The authors interviewed some 130 subjects and compiled a mountain of research, but Hopkins’ essence proves elusive. The authors detail the illiterate and mistrustful musician’s affection for liquor, gambling and hard cash, but they fail to plumb his inner life. Too often, the book settles into a frustrating pileup of concert itineraries and reviews, descriptions of recording sessions, nightclub back stories, musings on Southern race relations and long-winded source quotes in need of serious pruning. Hopkins’ combative relationship with his longtime producer, manager and agent, Mack McCormick, is the only interpersonal tale spun in any depth. The interior source of his remarkable and poetic gifts remains a mystery.

The blues master emerges more as a cliché than a living artist.