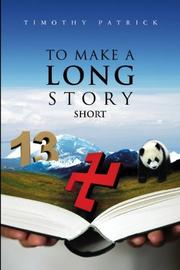 TO MAKE A LONG STORY SHORT

Four stories and a poem encompass themes ranging from metaphysical healing to the Holocaust.

Debut writer Patrick opens with a one-page verse voiced by a man who has forgotten how to be grateful, asking himself â€œis it merely human essence or just a spoiled brat that makes me this way?” Four stories follow, the shortest of which–â€œThe Final Tip”–is a clever tale narrated by an unnamed inanimate object who, after subsisting through a dark life of horrific abuse, torture and neglect, finally finds a home on a young waitress’ dresser. Humanitarian Andrea discovers she has miraculous healing powers in â€œLaryngitis”–simply by reading aloud the favorite books of those who are in dire health, she brings about their swift rejuvenescence. A series of accidents cripples her abilities as the increasing demand for her assistance overwhelms her and she realizes that â€œthere’s something bigger running our universe.” The first of Patrick’s heavily populated, novella-length entries, â€œBaker’s Dozen,” follows a female psychotherapist who finds her hands full with a melting pot of twelve excessively needy patients. Among them are a compulsive gambler, a junk-food junkie, an overeater, a shoplifter, a sex addict, a female narcissist, an OCD victim and a clean freak–each in a state of mental and emotional disarray. The group unites for a four-week â€œrevival camp” in the Adirondack Mountains where the interactive melodrama has surprisingly effective results. Two homosexual German guards who fall in love during Hitler’s 1941 reign in the touching tale â€œNothing Much to Write Home About”–they’re among the many desperately attempting to flee Nazi Germany for an unfettered future. Textured with authentic emotion and nail-biting suspense, Patrick saved this most impressive and complicated work for last. Considering this is the author’s debut, he already appears pleasingly accomplished.