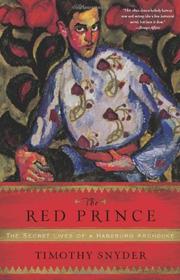 The Secret Lives of a Habsburg Archduke

Wilhelm was “raised to protect and enlarge the family empire in an age of nationalism,” writes Snyder (History/Yale Univ.; Sketches from a Secret War, 2007, etc.), by becoming a Ukrainian prince, “subordinate to the Hapsburg emperor.” The dismemberment of the Austro-Hungarian empire after World War I put an end to this notion, but Wilhelm continued to devote himself to the cause of Ukrainian independence. Snyder unravels Wilhelm’s story in a straightforward manner, beginning with key moments in his early life. At age 14, he enrolled in a military school in Moravia that novelist Robert Musil (an alumnus) had described only three years earlier as a hotbed of homoerotic activity. “Homosexuality, royalty, and the military were closely associated” in central Europe, writes Snyder, mentioning several contemporary scandals. During WWI, Wilhelm led Ukrainian troops and hoped for a role in an independent nation, but by 1922 the Ukrainian National Republic had been split between Poland and Russia. He wandered Europe at loose ends and in 1931 arrived in Paris, where he apparently indulged in liaisons with fellow aristocrats, furtive late-night visits to homosexual brothels and cross-dressing. When a female lover embroiled him in a fraud scheme gone wrong, he fled to Austria and briefly became enamored with Adolf Hitler, whom he thought might be favorable to his crusade to bring independence to the Ukraine. By the time World War II began, however, Wilhelm was a firm opponent of the Nazis. He became involved with Ukrainian nationalists again after the war, but the Soviets, intending to absorb all of the Ukraine, arrested Wilhelm in 1947; he died of tuberculosis after a year in captivity. The author tempers this grim personal denouement with a satisfying account of how the Ukraine finally achieved independence years after Wilhelm’s death.