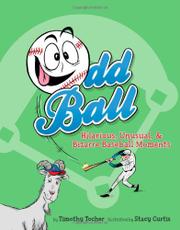 “Bizarre” barely covers some of the wacky incidents Tocher gathers from baseball history. A trainer inserted a severed ear into “Sweet Lou” Johnson’s abdomen after a bus accident (for temporary safekeeping), and it was never removed. Mets outfielder Joe Christopher was able to move his cap around by wriggling his ears. Ineffective Giants hurler Cliff Melton tipped off batters to his pitches during his delivery because his ears were so big they blocked out the stands behind his head. And that’s just “All Ears,” the first of nine thematic “Innings,” each presented as a set of simply drawn cartoon panels threaded with terse commentary and the occasional punchline. Though a little knowledge of the game will make it easier to appreciate some of these feats and mishaps, even nonfans will wince at the account of a fan who was hit by a foul ball twice during the same at-bat, marvel at the achievements of one-handed pitcher Jim Abbott and laugh at the generally futile attempts to catch balls (or in one messy case, a grapefruit) dropped from the top of the Washington Monument, a passing stunt plane and other high points. An easy pitch, particularly to reluctant or inexpert readers. (Nonfiction browsing item. 9-11)