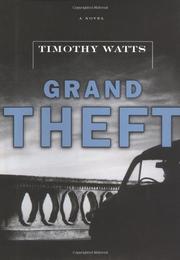 Watts takes the Jim Thompson edge off his line in neo-noir comedy (Steal Away, 1996, etc.) and ends up channeling Elmore Leonard at his most genial.

If you kill the top mobster in Philadelphia, sometimes you want to hide the corpse to keep things quiet, but sometimes you want it found, like an Under New Management announcement. When Izzy Feldman, the righthand man to jeweler/gunrunner Saul Rubin, talks Little Anthony Bonica, who just hired him to execute his boss Dominic Scarlotti, into making sure the body is found in order to clarify Anthony’s succession to the throne, Anthony thinks it’ll be good clean fun to stash it in the trunk of Teddy Clyde’s Acura. After all, Anthony grew up with Teddy and his stupid kid brother Davey-Boy without ever developing a tolerance for them, and the fact that Teddy, ostensibly a stockbroker, really makes his money as a high-end car thief just makes the joke a little better. But when the word comes down that Scarlotti had been wired by the Feds preparatory to rolling over on his nearest and dearest, the guys who were present at his whacking suddenly want his remains back, wires and all. If Teddy, accompanied by foxy cocktail waitress/investigative reporter Natalie Prentice, has already laid Scarlotti to rest in a location only they know, well, it’s anybody’s guess who’s going to come out on top in the ensuing flurry of double-crosses. The only thing that’s certain, maybe a little too certain, is that Teddy and Natalie are just so adorable together (“You’re supposed to act like a bad guy,” she coos just before he takes her to bed) that nothing terrible is going to happen to them. It’s pretty much open season on the supporting lowlifes, though.

Though Natalie compares Teddy to Chili Palmer, the whole setup is even more like Out of Sight than Get Shorty. Leonard completists, take note.