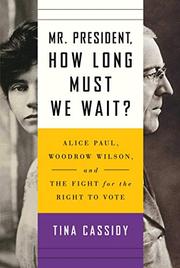 MR. PRESIDENT, HOW LONG MUST WE WAIT?

Alice Paul, Woodrow Wilson, and the Fight for the Right to Vote

A remarkable tale of the woman who drove the fight for women’s suffrage.

Former Boston Globe journalist Cassidy (Jackie After O: One Remarkable Year When Jacqueline Kennedy Onassis Defied Expectations and Rediscovered Her Dreams, 2012, etc.), now chief content officer for InkHouse, chronicles the life of Alice Paul (1885-1977), a Quaker from New Jersey who became one of the leaders in the struggle for women’s rights in the early 1900s—and beyond. She was the daughter of a wealthy banker and earned multiple graduate degrees. While she was studying social justice in Birmingham, England, she was profoundly moved by the “suffragettes” Christabel Pankhurst and her mother, Emmeline. Raised to expect equality for all, she stayed in London and joined the fight. She was arrested multiple times in six months, went on a hunger strike, and suffered permanent physical damage from force-feeding. Running parallel to Paul’s story, Cassidy gives us the background of the suffragist’s biggest stumbling block, Woodrow Wilson. Born in Virginia, his father, a minister, authored a booklet outlining his misguided argument for how the Bible condones slavery. Wilson’s outlook was firmly fixed along those lines, and he even said, “universal suffrage is at the foundation of every evil in this country.” He cast himself as a progressive, but that didn’t include women or blacks. Paul joined the fight for equality in America, a struggle that was not as confrontational as England’s but just as dedicated. While those in charge fought for states’ resolutions, she felt an amendment to the Constitution was absolutely necessary. To say Paul was the driving force is not an exaggeration. She was tireless, always sure of her tactics and willing to endure many setbacks, arrests, and Wilson’s continued obstinacy. Dedicated women like Inez Milholland, Alva Belmont, and Lucy Burns stood right beside her.

This book should be required reading until Alice Paul becomes a household name. She not only fought for voting rights and the 19th Amendment; she kept fighting for another 50 years.