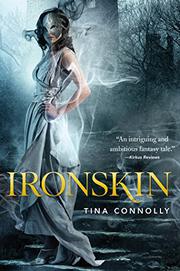 Connolly, in her debut, delivers a supernatural spin on Jane Eyre set in a gothic, alternate version of the Victorian era, in the aftermath of a war with powerful, forest-dwelling beings called the fey.

Jane Eliot, a young teacher and former governess, responds to a notice which reads, in part: “Governess needed, country house, delicate situation.” Dorie, the child in question, was born during the Great War between humans and fey that ended years ago and has telekinetic powers as the result of her mother, now dead, being “taken over” by a fey while pregnant. Jane dedicates herself to teaching the peculiar, stubborn child but wonders whether Dorie’s disquieting powers can be curtailed. Jane herself was disfigured by a fey curse during the war, and she wears an iron mask that partially obscures her face; without it, her glowing scar can supernaturally infect others with rage. Meanwhile, the child’s father, the charming but mysterious artist Edward Rochart, creates strange masks for his clients and hides a dark secret. Jane soon comes to realize that the war with the fey may not, in fact, be over after all. Connolly has created a complex and well-drawn world here, and the story is indeed an original and imaginative take on the gothic-fiction tradition. Some readers may find the prose somewhat bland and the occasional neologisms a bit distracting (such as “feyjabber” as a term for an iron spike). That said, Connolly will keep most readers engaged with her impressive worldbuilding, as details stack up about the Great War, the fey and a scarred postwar society.

An intriguing and ambitious fantasy tale.