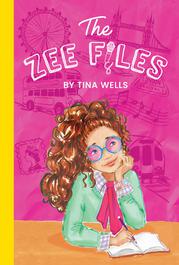 When her family moves to London, an American teen adjusts to a new school in this middle-grade novel.

Previously, 12-year-old Mackenzie Blue Carmichael, called Zee, detailed her seventh grade escapades in the five-volume Mackenzie Blue series. Now a year older and in the eighth grade, the red-haired, blue-eyed, olive-skinned Zee faces a major life change because her father’s job is taking the family to London from Los Angeles. Besides leaving behind sunny skies for London fog, Zee must say goodbye to Chloe Lawrence-Johnson, her best friend from Brookdale Academy. Another big change is that Zee will be attending a boarding school, The Hollows Creative Arts Academy, in the Cotswolds. That’s a bit intimidating, but the school has some huge advantages, especially its focus on the arts. She can concentrate on her singing and songwriting while studying academic subjects. Plus, her Brookdale friend Ally Stern now lives in Paris, just two hours away. Despite her anxieties, Zee makes several friends quickly. Unexpectedly, she is taken into the charmed circle of Izzy Matthews, a popular YouTuber, and hits it off with the school’s hottest ninth grade boy, the posh Archibald “Archie” Saint John the Fourth, a fellow songwriter. But hurdles remain, such as staying in touch with Chloe across time zones. Ally, too, has been mysteriously distant, canceling a planned Paris rendezvous for unclear reasons. Wells (now writing with Smith) continues the Mackenzie Blue series under a new umbrella title. Transplanting Zee to England allows for a fresh array of challenges and adventures, and American readers will likely enjoy learning about cultural differences with Britain. (Some references are off target; for example, the name St. John isn’t spelled “Saint John.”) Zee has a lively voice that makes her sound like a friend any teen would like to have, although few readers will be able to relate to the characters’ wealthy lives. Teens own expensive, high-status items like Alexander McQueen sneakers, and their school is so far out of reach for most that it might as well be Hogwarts. These elements are certainly entertaining as an aspirational fantasy, though Zee’s troubles seem lightweight indeed among so much privilege. The fast-paced plot ends rather abruptly just as it feels as if Zee’s story is really getting started; the tale continues in Book 2. Jamison supplies monochrome illustrations that deftly convey the teens’ expressive emotions.