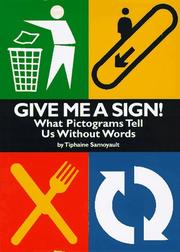 What Pictograms Tell Us Without Words

The layout and bright, clear colors in this import from France are attractive and appealing; the text, however, is less than successful. The word pictogram has odd linguistic roots, both Greek and Latin—pictus for painted, and gramma for writing. Samoyault explains that while substituting a picture for an object or idea is as old as writing, pictograms as we know them came into being in 1895, when the Italian Touring Club made the first road signs. Samoyault uses illustrations of the changing Olympic Games pictograms as well as travel and transportation signs, but also includes items—e.g., the ubiquitous laundry symbols on clothing- -that she does not explain or define. There is little consistency in whether a pictogram is actually defined or merely illustrated, or in the length of discussion given to each. The level of the language is also inconsistent. A colorful but mixed effort. (glossary) (Picture book. 7-10)