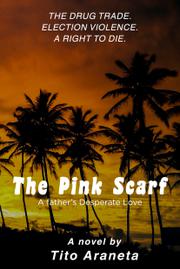 Political violence in the Philippines touches the life of a man in Canada in Araneta’s debut novel.

In Winnipeg, Manitoba, 56-year-old Filipino immigrant Dario Quitario, wracked with cancer and forgetful due to painkillers, is waiting to die. As his doctor prepares him for his assisted suicide, Dario’s mind drifts to his daughter, Angela. Not long before, in the Philippines, Angela was engaged to Ramon Reyes, a Harvard-educated lawyer and candidate for the office of vice mayor of Santo Cristo. Unfortunately, the sitting vice mayor, Paquito Gonzales—who wished to ascend to mayor and leave his previous office to his son—wasn’t about to let it go without a fight. “I’ve heard talk that Paquito protects drug lords,” Dario warned Ramon when the couple came to Canada for a visit. “He’s probably one of them. I don’t want to know where you stand on this problem of illegal drugs, for a very simple reason. If you condone it, you’ll be dying a slow death. If you fight it, you’ll be a dead man walking.” Dario, whose time in the Filipino military caused him to witness—and commit—acts of extrajudicial violence, knows of what he speaks. Ramon doesn’t heed Dario’s advice, however, and continues his grassroots campaign. Can an ailing Dario save his daughter and her fiance from the violence he once escaped? Araneta’s muscular prose captures the terseness of Dario’s world: “After a few seconds, Dario added, ‘we do what we need to do to stay alive.’ That was the closest that Ronnie would hear Dario mention any philosophy in life.” The book isn’t a traditional thriller—a good portion of it, set in Canada, chronicles Dario’s illness and his marriage to his much-younger wife, Barb. These more literary sections aren’t very compelling, however, nor are the Philippines sections all that thrilling. The characters have a lot of backstory, but the leisurely pace makes the book feel overlong, as a whole. Although many of the themes that Araneta raises are ambitious—corruption, the right to die—Dario, as a character, lacks the requisite complexity to bring them fully to life.

A country-hopping political novel that never finds its feet.