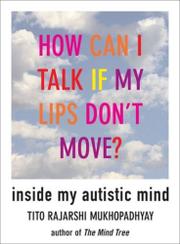 HOW CAN I TALK IF MY LIPS DON’T MOVE?

Inside My Autistic Mind

Diagnosed at age three, Mukhopadhyay (The Gold of the Sunbeams, 2005, etc.) was virtually mute. As a child he could not look at faces; he reports that even today recognizing faces remains extremely difficult, even threatening, especially if any social interaction is necessary. When stressed or fearful, he screams uncontrollably; when overwhelmed by sensory input, he flaps his hands repeatedly. Reflections in a mirror and shadows on the ground hold stories that only he can sense. He finds new situations or unexpected changes in his environment intensely disturbing, even alarming. He becomes obsessed with certain familiar objects—a rotating overhead fan, light switches, staircases and escalators, buses and trains. During a period living in California, he felt “trapped in a plastic box, suffocated” if he could not take the same bus-and-metro trip every day. Fortunately for Mukhopadhyay, he was raised by an extraordinarily determined and persistent mother. Parents of autistic children will take special interest in his mother’s step-by-step methods for controlling his aggressive and repetitive behaviors and for teaching him to perform simple tasks like tying his shoes and putting on a shirt. With her help, he learned when he was about six to trace and then write the letters of the alphabet and eventually to form them into words. Poems emerged that reveal his unique sensibility: “And all my mirror tales are gone / As my life goes on and on / Through my age, yet stories follow / Into the world of my shadow.” Questioning his reason for being, he tells himself that perhaps it is to remind people to be thankful for their gifts.

Mukhopadhyay’s detailed account of how the autistic mind works sheds light on a condition usually characterized by the inability to communicate.