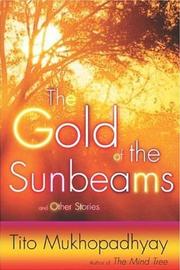 THE GOLD OF THE SUNBEAMS

Meditations and stories of contemporary India as reflected through the eyes of a 17-year-old autistic youth.

Mukhopadhyay is widely known for his memoir of autism, The Mind Tree (2003), begun when he was eight. In the introduction here, his mother describes how she trained the young writer from the age of three. The 12 pieces collected here evince his determination to communicate through the written word. The first story, “The Showers,” is perhaps the strongest. Vignettes vividly evoke village life in the aftermath of a cyclone: Rival politicians argue; a young boy who hates buffalos is stuck with the task of caring for the stubborn beasts in an impromptu communal grazing area; a teenage girl disappears after she is raped. “Just a Smile” pays tribute to an act that is difficult for Mukhopadhyay. Several other pieces, including “Impressive People,” “Grey, Apple Green, and White” and “The Broken Mirror,” also elaborate on single concepts, illuminating strange turns of mind. Mukhopadhyay explores these concepts in abstract, repetitive prose that is at times mesmerizing, at times tedious. Stories focusing on character are more effective. “Little Grains of Dust,” for example, follows a tea-seller and sometime thief who has adopted a gypsy disregard for place and sees fixed identities as a form of bondage. Likewise, the title story takes an empathetic look at the adjustment an adolescent boy must make when his father goes to jail for gambling, leaving him to be the sole support of his grandmother and younger brother. “The Calendar” and “Man at the Bus Stop” riff humorously on office life. Mukhopadhyay’s explanatory notes preface each piece. Imagining the days “when Mother won’t be around to take care of me anymore” proved the inspiration for “The Field,” a story that awkwardly takes as its unifying motif a nebulous presence named Emma. The final entry, “The Climb,” chronicles a New Age-y pilgrim’s progress with pallid symbolism that never engages.

A novelty that occasionally succeeds as literature.