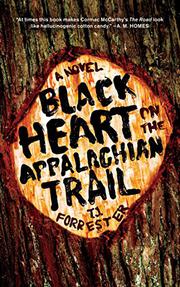 BLACK HEART ON THE APPALACHIAN TRAIL

Three damaged travelers connect with each other on a pilgrimage to trek over 2,000 miles of the Appalachian Trail.

A pilgrimage is usually a good thing. Dig the whimsical adventures of Bill Bryson’s trek in A Walk in the Woods or the heartwarming Emilio Estevez film, The Way, about the Camino de Santiago? This is not either of those stories. This is vicious backwoods noir in the tradition of Daniel Woodrell and Cormac McCarthy, and experienced hiker Forrester (Miracles, Inc., 2010) is damned good at his job. We open in the desolation of a village in rural Wyoming, where ex-con Taz Chavis is so messed up he finds himself feeling up a local barfly’s wooden leg. “That’s what the gutter does to a guy, eats him to the bone,” Forrester writes. Leaving town with still-raw memories of his cokehead girlfriend, Chavis swears to walk the entire length of the Appalachian Trail or die trying. Along the way, we meet Richard Nelson, a Native American who claims to be a shaman among his people. “White man, if you want to get laid on the trail, you best come up with some New-Age shit mixed with nature,” Richard advises. These guys seem all shades of normal compared with good citizen Simone Decker, who has a real thing for sharing high cliffs with other hikers (read: potential victims). “She’s here because she’s convinced herself that no one can thru-hike the Appalachian Trail and be the same person as when they started,” Forrester writes. “She hopes change will arrive like an erupting volcano, melting her genes so completely that when they cool she’ll become someone else entirely.” With bodies broken in trees and first-person plummets to death, the whole thing is, as our man Hobbes said, nasty, brutish and short. But for fans of snakebite prose, this is your book.

A dark, coiled-up ramble through the woods, as quick and cutting as a razor blade.