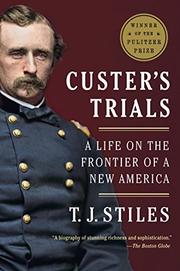 A Life on the Frontier of a New America

Custer graduated at the bottom of his West Point class in 1861 with the most demerits of any of the students. Only the demerits foreshadowed the brilliant tactician’s future. In the first half of the book, the author provides an excellent chronicle of Civil War battles and the politics of war. Custer’s undisputed prowess as a cavalry officer in the war fed his ambitions. He gained a place on George McClellan’s staff that would prove especially deleterious. His flamboyance, velvet uniform, and slouching hat might have made him a laughingstock, but his ability was real and his courage, sincere. His knowledge of tactics and ability to read his environment gained him promotions and celebrity. He led from the front, but he was incapable of management. His postwar assignments in Texas and Kansas brought out the cruel, tyrannical man who abused and humiliated his men. His published writings chronicle his fascination with natural history, but they provided little income. He dabbled in the railroads and a silver mine venture, and he gambled on stock speculation. Stiles ably points out his many defining flaws: his heroic style didn’t work in an era of tact and skill, and there is no doubt that he was self-serving, generally assuming that rules weren’t made for him and never showing remorse. In addition to examining Custer’s life, the author also introduces his cook, the fascinating Eliza Brown, an escaped slave who deserves a biography of her own.

Stiles digs deep to deliver genuine insight into a man who never adapted to modernity. The author confirms, but perhaps excuses, the worldview of the “boy general with the golden locks.”