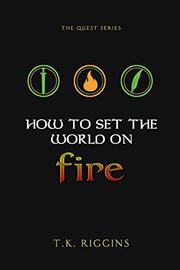 HOW TO SET THE WORLD ON FIRE

A YA fantasy novel about an enchanted school competition.

Debut author Riggins tells the tale of Kase Garrick, a young warrior-in-training at The Academy, a college of sorts that also produces wizards and scholars. He gets into trouble on his first day at the school when he runs afoul of a whiny boy named Niveous, who’s his older sister Cali’s boyfriend and also a professor’s son. Following an incident with Niveous, Kase reports for detention, during which he befriends Lenia and Talen. Lenia is studying to be a wizard and Talen a scholar. Although warriors, wizards, and scholars don’t usually mix, the three nevertheless form a bond. They eventually team up (along with Cali, after she breaks up with Niveous) for The Academy’s annual Quest Series competition. During the “Q,” as it’s called, Kase and his group, who call themselves the Liberati, are given seemingly impossible tasks, such as fetching molten rock from a volcano. Of course, the application of magic makes tackling them a bit easier, but they’ll also need problem-solving skills, among other, non-magical strengths. Aside from some sadness surrounding Cali’s breakup with Niveous—although it’s hard to tell what she saw in him, anyway—and some controversy involving a dragon, the book maintains a rather cheerful tone throughout. There is some dull dialogue, as in Kase’s long-range weapons class (“Help each other out, but safety is of utmost importance,” the instructor explains rather blandly). However, most of the narrative’s events move along quickly. The fun for readers comes less from trying to figure out how the tasks of the Q will be completed than from watching the chirpy young cast accomplish them in an expansive fantasy setting. In it, the team encounters creatures as varied as gargoyles, unicorns, and mermaids—and readers never quite know what will come next.