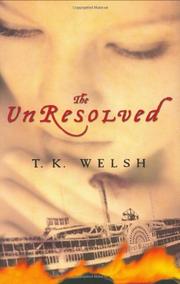 Prior to 9/11, the greatest single disaster of New York City’s history occurred on June 15, 1904, when the steamship General Slocum caught fire on the East River, killing over 1,000 passengers. Most were German women and children headed to the Sunday School picnic of St. Mark’s Lutheran Church. Welsh tells his story through the ghost of 15-year-old Mallory, whose first kiss—from a Jewish boy—may have precipitated the fire. Mallory’s ghost roams the Lower East Side, witnessing the attempts of the grossly negligent steamship company to avoid blame; the parents carrying tiny, home-made coffins to the graveyard; and the German merchants, hoping to scapegoat someone from outside their community. In this last, Welsh falls short, as the catastrophic emotions the survivors must have felt pale, in his version, against the idea that they might be able to blame a Jew. While the physical time and place are very well realized, the emotional landscape isn’t—Mallory’s ghostly presence contributes to an overall feeling of detachment. On the whole, however, a remarkable account of an incident about which many Americans know nothing at all. (Historical fiction. 14+)