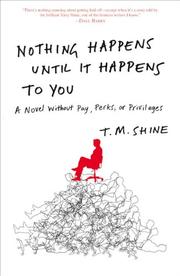 NOTHING HAPPENS UNTIL IT HAPPENS TO YOU

It’s only the end of the world for a semi-journalist who loses his lifetime gig.

Florida journalist Shine turns on his profession with this acidly funny but disjointed first novel about a newspaper refugee who takes unemployment harder than most. His Everyman hero is 46-year-old Jeffrey Reiner, the listings editor at a South Florida weekly with an atmosphere so poisonous that the employees flee to happy hour at the first whiff of a layoff. This introduction has a similar vibe to Joshua Ferris’ Then We Came to the End, as Reiner mourns the loss of the humdrum job he’s held for 18 years. His wife, Anna, is a terrifying perfectionist who soon loses patience with Jeffrey’s self-delusions. “All the career counseling and self-help books and job fairs and networking crap—it’s all monotonous and repetitive,” he whines. “There’s too much emphasis on working. They act like nobody can exist without having a great job. There are other things I’m doing. Important things.” Meanwhile, his kids Andrew and Kristin are incensed over the loss of cable and laptop privileges. To deal with his increasing stress, Jeffrey contemplates writing a blog about his plight, spends time with his loser buddies and uses his unemployment counselor as a makeshift shrink. Before long, he’s taking questionable assignments from Omar, a fly-by-night entrepreneur. There are highlights to this dysfunctional odyssey—a major freak-out involving a tire dealer and a disastrous trip to swim with dolphins are two of the book’s best moments. However, for all the zippy dialogue and culturally savvy humor, the story never seems to go anywhere—just like its increasingly tiresome protagonist’s career. The book might appeal to the masses of unemployed workers out there, but its lessons are few and far between.

A sprawling story about the value of work that ultimately misses the point of redemption.