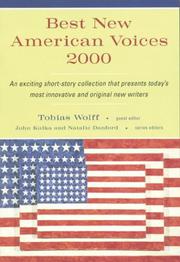 All the tales are more than formally and stylistically competent, few betray any unduly heavy influences, and several would stand out in any fictional company. The immigrant experience is explored with wry compassion in Shimon Tanaka’s unusual story (“Video Ame”) of Asian-American siblings adrift between their cultural origins and their strident new country; Kate Small’s bleak portrayal of a decimated Kosovar family relocated in Oregon (“The B-Zone Open”); and novelist William Gay’s “The Paperhanger, . . .” (its full Updikean title is much longer), in which a Pakistani woman’s resentful experience of America is imagined with nightmarish intensity. More general contemporary concerns dominate David Benioff’s [see XXXX] lusty tale of a rock-music agent unwisely involved with some certifiably weird new talent (“When the Nines Roll Over”); Merrill Feitell’s savvy scrutiny of a 30-ish urbanite whose imminent path to the altar is sidetracked by a forthright teenaged girl (“Bike New York!”), and especially Ladette Randolph’s subtle study of the complex “glimpse of transcendence” experienced by a coed who “sits” for her eccentric mentor’s even more eccentric house-pets (“The Girls”). Even better are Ana Menendez’s deeply sympathetic picturing of culture-shocked Latin American refugees in Miami (“In Cuba I Was a German Shepherd”), Adam Johnson’s dry revelation of passive young slackers thrust incongruously into thrill-seeking and “wild life” (“Cliff Gods of Acapulco”), and, most notably, “The Hatbox,” by Jennifer Vanderbes: a moving novella that gradually unfolds the interrelated ramifications of a secret that originates in East Africa and thereafter possesses, and poisons, the lives of three generations of women.

Both the imperatives of multiculturalism and a proliferation of genuine literary talent have stimulated a contemporary plethora of story anthologies. This lively volume is one of the best of them.