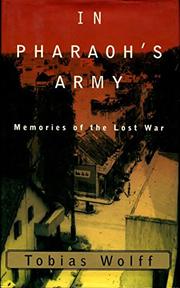 Memories of the Lost War

Wolff continues his memoirs in this excellent volume, with his keen prose, dispassionate mordancy, and writer's attention to mood and characters applied to Vietnam's moral absurdity. The target rifles, scout troops, and juvenile delinquency described in This Boy's Life (1989) find ironic parallels here in M-16s, Special Forces, and wartime cynicism. After flunking out of prep school and jumping ship in the merchant marine, Wolff drifted into the army at 18 in 1965, having given little real thought to either the war or adulthood. Basic training and officer's candidate school subsequently confirmed to him his unsuitability for the soldier's life while the Army mechanically processed him along. His field posting as a military liaison to the South Vietnamese army, however, was less hazardous than his boot-camp peers' lethal assignments to the north. Initially, his most complicated mission was trading a Chinese rifle for a distant base's color TV in time for the ``Bonanza'' Thanksgiving special, and his luck held throughout the constant threat of Vietcong snipers and even the Tet Offensive. Alongside the obtuse inefficiency of his gung-ho replacement and the ``Quiet American'' idealism of a Foreign Service friend, Wolff's potential for youthful self-delusion and malevolence are only heightened in Vietnam; these are expressed in his insincere defense of the war in an argument with the father of a friend (who would desert just before shipping out) and his willful negligence to spite an officer, which resulted in a hamlet being flattened under a hovering Chinook helicopter. After coming unscathed out of this dispiriting and undistinguished tour of duty, Wolff attended a send-off party with Vietnamese hosts who, in mocking recognition of his services, served a dog stew made from the puppy he had adopted on his arrival. If less intense than his earlier memoir's portrayal of a troubled childhood, this candid work evenly weighs the many costs and few gains of coming of age in a war.