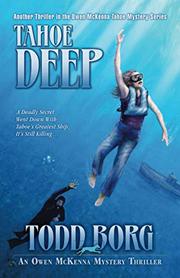 Silent about an apparent murder for eight decades, an elderly man finds the past has violently caught up with him.

In Borg’s (Tahoe Skydrop, 2018, etc.) 17th installment of a series, Tahoe detective Owen McKenna investigates the brutal beating of nearly blind nonagenarian Daniel Callahan, who unconvincingly claims to have injured himself in a fall. Athletically built, dark blonde Mae O’Sullivan, one of Callahan’s neighbors, looks after the elderly man. A member of a diving community (Lake Tahoe is a mere block away), she meets with McKenna, who, after shaking her hand, remarks that she “didn’t crush my fingers, but I sensed that she could put on a serious squeeze if she wanted to.” After the bloated body of a male diver distantly related to Callahan washes up on a nearby beach, authorities have trouble identifying the cause of death but note the corpse has a tattoo of the famous Casper David Friedrich painting The Sea of Ice. From Jay Brandon “Brand” Morse, the dead diver’s sketchy roommate, McKenna learns that the deceased was obsessed with treasure hunting. The detective also discovers a possible link between Callahan’s beating and the matricidal Bosstro brothers, known as “Chinless” and “Flyboy.” The former’s microchin is “nothing more than a little bump on the way to his throat” and the latter sports a tattoo of a “champion horse fly” on his nose. McKenna’s girlfriend, Street Casey, helps connect the dots in a case whose origin reaches back 80 years to Callahan’s long-dead older sister. Casey and McKenna share charming, flirty banter and a love of dogs; he has Spot, a Harlequin Great Dane, and she has Blondie, a Lab. McKenna marvels that when Casey, an entomologist, meets O’Sullivan, a librarian, they find a “common ground, a science undercurrent that operates on research and principles of knowledge.” Conversations throughout the story are realistic and often witty. The vivid characters have a broad range of ages, ethnicities, and socio-economic upbringings, and each one has a distinct voice. The background information on diving, particularly free diving, in which the breath is held, is robust. The book offers a smart, intriguing mystery, and the series gives a strong sense of the Tahoe area, akin to what Carl Hiaasen’s novels provide for Florida.

A superior entry—and hopefully not the last—in a long-running mystery/thriller series.