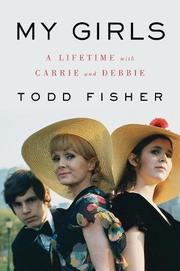 A Lifetime with Carrie and Debbie

by Todd Fisher with Lindsay Harrison

In an even-keeled and affectionate memoir, the son of Debbie Reynolds and brother of Carrie Fisher looks back on a life with two feisty women, who died within a day of each other in December 2016.

Raised by a mother who was equal parts workaholic and alcoholic, and who was fiercely dedicated to her children, Fisher—a director, cinematographer, and producer—and his sister grew up in a household with servants to spare. It was a place where Elizabeth Taylor and Richard Burton were apt to drop by for cocktails and elephants were brought in for birthday parties. Once, Reynolds allowed Todd to bring an entire Western city stage set from the MGM lot, where it was about to be bulldozed into oblivion, and reassemble it in the backyard so that he and his friends could shoot Westerns. The good times came to an end when Reynolds learned that her second husband, Harry Karl, had been embezzling her money and squandering it on gambling and bad investments. The author details his mother's increasingly frantic efforts to stay solvent, including long stretches of performances in Las Vegas and on Broadway, and he is as frank about her business failures as he is about his sister's struggles with mental illness and drug abuse. Cheerful and unreflective, Fisher appears to let much of the family drama wash over him without drowning in it. “If you haven't noticed, I don't spend a lot of time psychoanalyzing things,” he notes. The book, which the author describes as “a long love letter and thank-you note to the two most pivotal, extraordinary women I've ever known,” is thoroughly illustrated with family photos.

Fans of Reynolds and Fisher should be pleased by this satisfyingly rich look at their lives, in which the shocking bits are always mitigated by love and understanding.