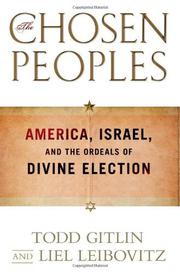 America, Israel, and the Ordeals of Divine Election

by Todd Gitlin and Liel Leibovitz

A treatise on the roots and consequences of believing that one’s people and oneself are chosen by God, specifically in the cases of Israel and the United States.

In the first half of the book, Gitlin (Journalism and Sociology/Columbia Univ.; The Bulldozer and the Big Tent: Blind Republicans, Lame Democrats, and the Recovery of American Ideals, 2007, etc.) and Tablet magazine editor Leibovitz (Aliya: Three Generations of American-Jewish Immigration to Israel, 2005) consider Jewish history from the time of the Torah through the Zionist occupation of Israel in the 1960s. They look closely at the origins of the Hebrew children’s divine election and its evolving interpretations through the centuries. So abiding and pervasive was the idea of chosenness in Jewish culture, the authors argue, that it united both secular and religious Jews in justifying the creation of a nation-state in the Holy Land. The second half of the book traces American history from Puritan colonists, who considered themselves the inheritors of God’s covenant with Israel, through all of the major 19th- and 20th-century presidents. As the idea of America grew, so too did its people’s faith in their exceptional status as God’s gift to the world and their divine purpose in bringing his kingdom to earth, whether in the form of ever-spreading Christian salvation, democracy or social justice. The final two chapters delve into the authors’ opinions about chosenness and how it governs the actions of even the so-called “unchosen.” Gitlin and Leibovitz draw apt comparisons between the two cultures’ often violent uprooting of the respective native peoples—Palestinians and Indians—that got in the way of their manifest destinies. Although the section on American history flows more smoothly, the Jewish chapters offer a more complex examination of how the idea of chosenness has figured both politically and psychologically. The book offers lively, approachable scholarship for the lay reader and student of history alike, featuring sharply rendered arguments at a pace that rewards sustained attention without oversimplifying.

A nuanced, carefully considered comparison of the deep-seated beliefs that pervade both groups.