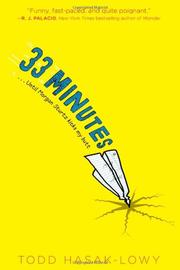 Brainy seventh-grader Sam Lewis actually takes 1 hour and 35 minutes to let go of the idea that he and former best bud Morgan Sturtz can still be friends.

First, there's the agonizing wait for the fight Morgan has promised at recess. Sam has done something quite stupid, though readers don’t learn exactly what that is until well into his narrative. Chapters headed by the time of day describe a tedious social studies class, an epic cafeteria food fight ending with a salad-bowl blow to Sam’s head, a fire drill that turns out to be real and, finally, a solid right to Sam’s chin. Though the details are specific—and funny—the sad situation is not unusual. In middle school, Morgan has shot up physically and found his place on the football team; Sam, still short and skinny, stars at math. Six elementary school years together and an amazing day of shared video game mastery is not enough to sustain their friendship. New neighbor Chris Tripadero fans the flames. This realistic picture of early teen life includes at least one aware teacher who counsels patience and advises Sam that he won’t be there forever. Readers will probably appreciate the message.  Occasional hand-lettered black-and-white sketches add to the appeal of this satisfying school story. (Fiction. 10-13)