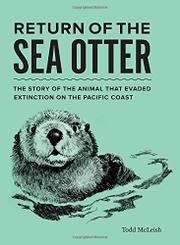 RETURN OF THE SEA OTTER

A Rhode Island–based science writer explores the recovery from possible extinction of what may be “the cutest animal on earth.”

These animals, writes McLeish (Narwhals: Arctic Whales in a Melting World, 2015, etc.), don't just look cuddly and have a delightful ability to use tools; they also help maintain the marine environment where they live. After their numbers were severely cut by fur trading, the crucial kelp forests where the otters hunted suffered significant damage by sea urchins, the otters’ preferred food. With the otters back again, the kelp ecosystems flourished. Sea otters are a well-studied species, and the author devotes chapters to time spent with researchers along the Pacific coast from Alaska to California. He sailed out with spotters to count otters, and, in “the most precious fifteen minutes of my year,” he observed a rescued otter pup being groomed by an aquarium worker. He attended “necropsies” intended to reveal why otters have died and was appalled to learn how many females are killed during mating. McLeish also considers, though doesn't adopt, the viewpoints of those who consider sea otters “the rats of the sea.” Native Americans in Alaska, as well as other fishermen along the northern Pacific coast, are frustrated by the fact that animals left to range by the Marine Mammal Protection Act are devouring the same invertebrates the fishermen would like to harvest and sell. McLeish smoothly integrates background about the animals into his narrative, and he works in details about the history of their interaction with humans over the past few decades. Some of those attempts to save the otters, such as the introduction of surrogate mothers, have succeeded; others, such as relocation, haven't been as successful. The author also explains the complications of the relationships among the various protected marine mammals: in some places, the main enemy of the otters is the killer whale.

A cautiously hopeful and well-researched tribute to an animal easy for most humans to love.