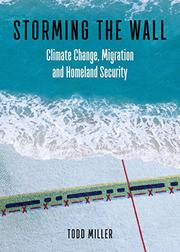 A well-researched and grim exploration of the connections between climate change and the political hostility toward the refugees it creates.

Journalist and activist Miller (Border Patrol Nation: Dispatches from the Front Lines of Homeland Security, 2014) expands on his earlier focus on U.S.–Mexico border controversies with an alarming catalog of climatological effects on population movements, surveillance, violence, and other current issues. “The theater for future climate battles,” he writes, “will be the world’s ever thickening border zones…vast numbers of people will be on the move, and vast numbers of people will be trained, armed, and paid to stop them.” In eight punchy, discretely themed chapters, the author establishes that the destructive effects of climate change are already manifest and that the U.S. is establishing a violent, heavy-handed pattern of response to it, as seen in the ramping up of border security. Miller visited several locales to witness this bleak transition, including Honduras and the U.S.–Mexico border, and he argues that these developing strife zones, far from representing natural change, are fundamentally class-based phenomena: “In the climate era, coexisting worlds of luxury living and impoverished desperation will only be magnified and compounded.” Ironically, the American military is committed to scientifically based preparation for coming crises, as is private enterprise. Miller also visited security conventions to see how the same corporatized elites who resist climate-change measures like the Paris Agreement will benefit financially from its increasing ill effects. He emphasizes that the harrowing confluence among climate disasters and militarized responses on behalf of elites is already prominent, noting that murders of activists skyrocketed in the Philippines following Typhoon Haiyan, comparable to the use of privatized security to resegregate New Orleans after Hurricane Katrina. Miller makes a convincing, chilling argument based on an effective synthesis of research, interviews, and personal observation, and the impact is only slightly undercut by an occasionally shrill or pedantic tone.

A galvanizing forecast of global warming’s endgame and a powerful indictment of America’s current stance.