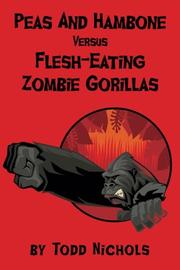 A boy and his dog face off against a horde of zombie gorillas in this action-packed adventure by debut author Nichols.

Peter, whose nickname is “Peas,” is an ordinary 10-year-old kid with an extraordinary dog named Hambone. The dog walks and talks like a human but only when he’s alone with Peas, and he gives Hobbes (of Bill Watterson’s famous Calvin and Hobbes comic strip) a run for his money. Snarky troublemaker Hambone is determined to get even with a gorilla who threw “dirt” at him, so he and Peter break into the zoo early one morning. As they try to determine which gorilla is Hambone’s nemesis, they stumble upon an evil plot: One of the gorillas (whom Peas nicknames “Evil Doctor Crazy Gorilla”) gives the other gorillas a smoky green potion that turns them into zombies. Peas and Hambone are the only ones who stand between humanity and the zombie gorilla incursion, aside from crazy Mr. Oswalt, who’s so obsessed with World War I that he pilots a Sopwith Camel biplane around the neighborhood, and the Mama’s Boys biker gang, which fights with foam swords and squirt guns. Peas, who’s seen a lot of scary movies, knows that where there’s a potion, there must be an antidote. Hambone, who suffered a “childhood trauma involving the movie King Kong,” has a serious hatred of gorillas and zombies, and he comes up with the plan that eventually leads them to the mad scientist’s lair. Peas and Hambone’s first outing, full of chase scenes, absurd combat, cross-dressing and gross-out humor, is a madcap adventure sure to appeal to fans of Dav Pilkey’s Captain Underpants books and Jeff Kinney’s Diary of a Wimpy Kid series. The vocabulary and pacing are well-suited to reluctant readers, and Nichols’ silly, coined phrases (such as “whup-butt” and “Oh-my-shnippies!”) are catchy enough that kids might adopt them.