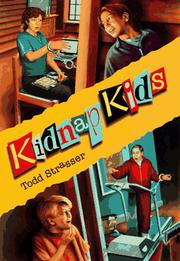 There's nothing like a terrorist attack to bring a family back together, as two brothers and their hyper-frantic parents discover in this wild, patchy problem novel from Strasser (Hey Dad, Get a Life!, 1996, etc.). With their father off on world-spanning business trips and their mother prosecuting a high-profile trial of a group of militants dubbed the Nut Bombers, Steven and Benjy seldom see either one. After months of being escorted to school as a security precaution, and guarded at home by a succession of unappealing nannies, the boys are sick and tired of being on their own. They shovel on the guilt; when their parents finally agree to a weekend in the country, the boys are relieved but suspicious. Sure enough, Mom and Dad bring along work—so Steven and Benjy deftly handcuff them to heavy furniture when they're not paying attention, and lock their cell phones and laptops in a trunk. Enter a trio of Nut Bombers bent on revenge—and the stage is set for a night of narrow escapes. Through his narrator Steven, Strasser lays on such a thick parental guilt trip that the boy sounds more whiny than resourceful, and the events of the story are more of a series of set pieces than a single plot. Steven and Benjy's feelings, however, will be understandable to plenty of young readers, and just as close to their hearts will be the wish to—occasionally—take their own parents prisoner. (Fiction. 10-12)