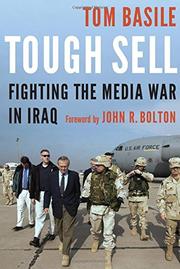 Fighting the Media War in Iraq

A controversial defense of the 2003 military intervention in Iraq that overthrew the regime of Saddam Hussein.

Basile—a Forbes opinion contributor, faculty member of Fordham University, and principal of the New York–based strategic communications firm Empire Solutions—combines a vivid account of his on-the-ground experience in Iraq as senior press adviser to the Coalition Provisional Authority from 2003 to 2004 with an exploration of the political issues that were involved in the Bush administration’s decision to remove Hussein from power. “The coalition wasn’t merely engaged in a fight to build a more participatory society against incredible odds,” he writes. “It was also in a constant clash with forces that affected public perception about the mission.” The author contends that the need to shape public opinion is one of the most important lessons to be learned from the Iraq mission. Although the ostensible justification of the military intervention—the claim that Hussein had acquired weapons of mass destruction and the existence of a link between his regime and al-Qaida—proved to be false, Basile believes that the war was justified, a wake-up call that alerted us to the danger posed by terrorist groups. However, as the author writes, the “failure to win the media and communications war in Iraq” has left the U.S. more vulnerable “against ISIS and its affiliates.” The merits of the author’s argument are debatable, but his personal account of his experiences reporting the war is gripping. The author rightly points out that confidence in government and media reporting are near all-time lows, creating “a toxic blend that leads to the erosion of citizen-controlled government in the United States.” Basile faults President Barack Obama for downplaying the role of Islamic terrorism and failing to make “the tough sell” needed to maintain a foreign policy that would guarantee “our ability to lead on the world stage.”

An engrossing account of the author’s own experiences written to justify questionable foreign policy that many readers will question.