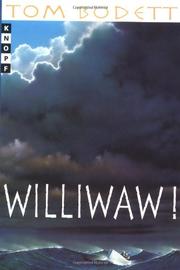 PLB 0-679-99030-5 Bodett (for adults, The Free Fall of Webster Cummings, 1996, etc.) tacks toward a younger audience with this tale of two siblings who prove they’re not ready to be on their own. With her fisherman father gone for yet another long stretch, September, and her brother, Ivan, keep up with chores and school lessons in their isolated Alaska cabin; then Ivan attempts to jury-rig a power connection for his video game, and shorts out both radios. Despite their father’s express prohibition, the two boat for town, 14 miles across the bay, to get the radios fixed. That first trip becomes a series after September and Ivan discover that the pleasures of the local french fries, chocolate shakes, and human contact outweigh the guilt of breaking promises. Ensuing complications and several poor decisions ultimately put them out in the bay when a “williwaw,” a sudden storm, howls in. It’s a wild, exciting climax, but the author reaches it only after a leisurely exploration of the push-pull relationship between two lonely children on the edge of adolescence. Reader-interest in these capable but not yet self-reliant characters may flicker in the face of Bodett’s overwritten prose and his tendency to harp on certain themes, such as Ivan’s video game addiction. Still, with the thrilling finish and singular setting, this is a promising effort. (Fiction. 11-13)