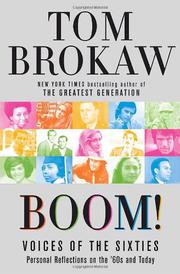 Voices of the Sixties: Personal Reflections on the ’60s and Today

Veteran newscaster Brokaw (A Long Way from Home: Growing Up in the American Heartland, 2002, etc.) turns in proof positive of the theory of relativity: Arlo Guthrie and Dick Cheney inhabited the 1960s at the same time.

Guthrie and Officer Obie—aka William J. Obanheim, longtime Stockbridge, Mass., chief of police made famous in the folk singer’s epic 1967 protest song, “Alice’s Restaurant”—became friends in the end: Guthrie noted, “He was a wonderful, wonderful human being.” It is doubtful that Arlo will warm up quite so well to Karl Rove, another child of the ’60s who insists that his intervention in the matter of Terry Schiavo was advocacy for the disabled. Rove spent the time far from the rigors of Vietnam; so did Cheney, who spent the time drinking up a storm and concluded, his own radical freak flag flying, “Close elections don’t mean you trim your sails in terms of your agenda.” Brokaw is respectful—after all, you never burn a source—but twits Cheney for his preference for the retrograde ’50s, when DUIs were cool and “homosexuality and race were easy targets for bigots.” The author confesses that his own service in the ’60s wasn’t exactly idyllic, as he garnered fat paychecks as a newsman in Los Angeles while his brothers did time in uniform (he tried, but flat feet kept him out). He gives space to some of those who enjoyed similarly soft circumstances, such as Warren Beatty, who took a break from the ’68 Democratic Convention by partying at the Playboy Mansion. Brokaw is more inclined to hang with more serious players, such as Chicago mayor Richard M. Daley, who says of Vietnam, “That war . . . tore the heart out of our country.” Capably painting the contours of the time and its many issues, Brokaw even admits a little fondness for Richard Nixon while getting close to what a well-placed source (whom he doesn’t identify until 400 pages into the book) calls “the code”—the real message of the ’60s.

In an evenhanded and well-tempered book, stuffed with a sterling cast of interviewees adding their voices to his, Brokaw does a nice job of trying to crack the code.