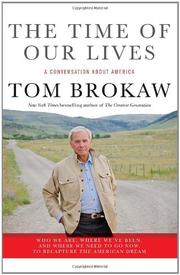 THE TIME OF OUR LIVES

A Conversation About America

The venerable newscaster administers advice for our ailing nation.

Brokaw (Boom!: Voices of the Sixties Personal Reflections on the ’60s and Today, 2007, etc.) jumps into triage mode with this tenderhearted, nostalgic journalistic roundup, just in time for the upcoming presidential election. The author sounds the themes familiar to readers of his Greatest Generation (1998) and other works—e.g., that the United States is an immigrant nation and derives its strength from the enterprising mix, that Americans need to learn more science and math to compete with China and Korea, as well as embrace thriftier habits and volunteer for public service. Brokaw and his wife are grandparents now, and the author moves in an exalted retirement that allows him to reflect on the collision of generations throughout the decades. He harkens back continually to the values instilled in him growing up in South Dakota in the ’50s, with frugal parents who had come through the Depression and were determined to give their children more than they had. As a  result, his “bridge generation” tended to be somewhat consumerist, “a little giddy by what we were earning and all the new opportunities to spend.” Brokaw is especially good at working the human-interest angle; he includes telling vignettes about people who’ve been bankrupt by the housing bubble, and others who have thrown their resources, money and talent into public service and community activism. Each chapter sounds a nostalgic theme—e.g., “Stepping Up and Signing Up” or “Balancing the Book of Life”—to assert how best to tap back into the rosy themes that made America great, as if this past can be regained.

An ever-upbeat message from the well-connected yet modest veteran journalist.