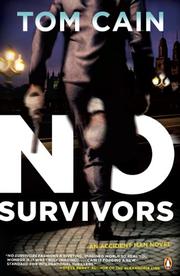 A stone-cold killer returns from the dead to stop a plot to launch a holy war.

Pseudonymous British author Cain (The Accident Man, 2008) resurrects hit man Samuel Carver for another gritty adventure. As the novel opens, Carver is still recovering in a Swiss hospital, his mind splintered by torture. Struggling to pay for his care, his lover Alix Petrova reluctantly accepts a new assignment from Olga Zhukovskaya, her former handler in Russia’s intelligence service. Petrova’s mission: to cozy up to a renegade American soldier, Lt. General Kurt Vermulen, determined to defend his country from Islamic jihadists—at any price. She discovers Vermulen is key to a scheme financed by dying Texas oil baron and psychotic religious convert Waylon McCabe, who barely survived a plane crash orchestrated by Carver five years ago. The cabal’s goal is to incite a global war between Christianity and Islam by dropping a nuclear weapon on Temple Mount in Jerusalem. The sequel’s commencement is a little sluggish, mostly because it takes Petrova’s absence to shock Carver into motion and nearly a quarter of the book to concoct Cain’s multifaceted conspiracy. The theatrical villains are a trifle over the top too, but Cain remains particularly adept at writing post-Bourne action sequences, and Carver is a first-rate action hero. Once the icy killer is jolted back to life, the story takes off rapidly with an aborted assassination attempt in Carver’s hospital room, a grueling training sequence in Norway and a healthy dose of spycraft as Carver and Petrova maneuver their way toward the conspiracy’s inner circle. Throw in a nail-biting stealth mission to secure the codes to the stolen suitcase bombs and an 11th-hour airborne endeavor to prevent Armageddon and the book makes for one hell of a weekend’s worth of entertainment.

Not the slam-dunk it might have been, but a worthwhile sophomore entry in a promising action franchise.