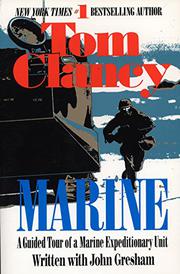 A Guided Tour of a Marine Expeditionary Unit

A vivid briefing on an elite American assault force whose esprit and diverse capabilities remain invaluable in a high-tech era of push-button warfare. As he did in earlier nonfiction works (Fighter Wing, 1995, etc.), bestselling novelist Clancy offers a comprehensive rundown on a top-notch US military outfit, in this case, a Marine Expeditionary Unit of the sort that rescued Scott O'Grady, the Air Force captain who was shot down over Bosnia in mid-1995. Before assessing MEUs in detail, however, he provides a concise history of the US Marine Corps and the special role it has played in so many of America's wars or police actions. The author goes on to inventory not only the arsenal of weapons that are workaday tools of the leatherneck's lethal trade but also the heavy equipment that supports the USMC in combat (armored vehicles, helicopters, landing craft, jet fighters, et al.). Getting down to business, Clancy profiles the 26th MEU, a composite group whose air, land, and seagoing elements can be rapidly deployed to the ends of the earth on a variety of special operations (amphibious raids, hostage recapture, humanitarian relief, reconnaissance). Having reviewed the post-Vietnam development of the Marine Expeditionary Unit and its doctrine, he follows the 26th on a brutally realistic training exercise with the US Navy in the waters off Camp Lejeune, N.C. In an entertaining and instructive finale, the author calls on his considerable storytelling skills to deliver credible accounts of how the 26th MEU might be employed after the turn of the century to eliminate the threat posed by a nuclear-weapons facility in Iran or to repulse an attempt by the Malaysian Federation to annex oil-rich Brunei. A lively, full-dress-blue report on a unique band of warriors and their varied missions.