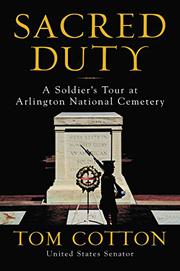 The 3rd U.S. Infantry Regiment, aka the Old Guard, is the oldest active-duty regiment in the Army. “Since 1948,” writes Cotton, who served in the 3rd between combat tours in Iraq and Afghanistan, “the Old Guard has served at Arlington as the Army’s official ceremonial unit and escort to the president.” Any soldier seeking to join the Old Guard must meet the highest mental, physical, and moral standards in the military, and they cannot have civil or military convictions or drug, alcohol, or financial issues. Public missions include funerals at Arlington, state funerals, presidential inaugurations, and serving as sentinels at the Tomb of the Unknown Soldier. The recruitment of sentinels is only within the Old Guard, and the training cycle is extremely difficult. It includes learning at least 20 distinct marching movements as well as a test of stamina in which one must stand ramrod still, without bending knees or wiggling toes, maintaining ceremonial composure for 75 minutes. Though some readers may think the author provides too much detail on uniforms, procedure, and training, he explains that in the Old Guard, perfection is not just a goal, it’s an absolute. Pleats and shirt tucks are measured to the inch, stray threads are burned off, and wrinkles are unheard of. Attending multiple funerals in a day, the guard is transported by van, but they’re not allowed to sit down lest they wrinkle their uniforms. As Cotton demonstrates, the uniform prep, cleaning, insignia, and badge placement are stressed continually. Among other reasons, they meet these strict guidelines because a family only gets one funeral; it must be perfect every time. “What the Old Guard does inside the gates of Arlington,” writes the author, “is a testament to the noble truths and fierce courage that have built and sustained America.”

A must-read for military members and their families that is sure to appeal to patriotic Americans of all stripes.