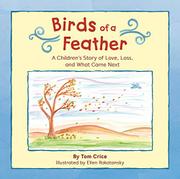 BIRDS OF A FEATHER

A Children's Story of Love, Loss, and What Came Next

A boy finds a way to deal with his beloved grandfather’s death when he sees two birds separated on the subway in this debut picture book.

The difference between an unnamed child’s summers with his grandfather in a small Texas town and daily life in the city is huge. When the boy visits Pop, it’s his job to help load the delivery truck; after work, the two eat lunch at a cafe together. They are so much alike that the waitress calls them “birds of a feather.” After Pop dies, the boy goes to the funeral, but he knows it’s not his grandfather in the casket “because he didn’t smile at me once.” Angry, hurt, and sad, the boy doesn’t know how to cope with his grief until he sees two birds trapped on the subway. When the pair become separated at different stops, he identifies with the one still on the train, recognizing her fear and the loneliness in himself. After she escapes, he wonders how she will cope—but realizes that even if she can’t find her mate, life is still a big adventure. Crice captures the complexity of a child’s feelings with expert precision, taking a tough experience and exploring it with honesty, never flinching from the hard emotions. The soft-colored pencil and acrylic images by debut illustrator Rakatansky—which mostly show landscapes, cityscapes, and animals—match the story’s gentle tone perfectly.

Parents seeking ways to discuss a loved one’s death with their children should find this touching tale, with its analogy of lost birds, useful in grappling with a difficult topic.