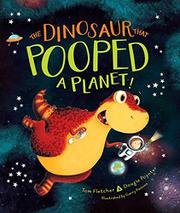 THE DINOSAUR THAT POOPED A PLANET!

When Danny takes his voracious pet dinosaur into space but forgets to bring lunch, there’s only one way to get back home.

Soaring into orbit aboard a rocket stolen from the science museum, Danny’s all set for an exciting adventure. Unfortunately, the lack of provisions soon has his humongous companion not only chowing down on the control boards, but sallying out to chomp on the moon, Martian passers-by, “satellites, Saturn, and six supernovas, / Shape-shifting saucers and seven space rovers,” until at last even the spacecraft itself has gone down the hatch. How to get back to Earth? Dino to the rescue: “With the feeling of guilt deep down in its gut, / Its brain brewed a plan involving its butt.” Propelled by a massive diarrheic stream that looks in the cartoon illustrations like golden cake batter studded with partially digested science gear, off rockets the white lad perched aboard his bulbous buddy…leaving behind a new, brown companion for the moon. Fletcher, Poynter, and Parsons gleefully and unapologetically play to the lowest possible common denominator, from concept to limping verse and (adult) stomach-turning visuals.

It’s easy to smell a storytime hit, thanks to the combination of unvarnished doggerel and poop in literally astronomical quantities.