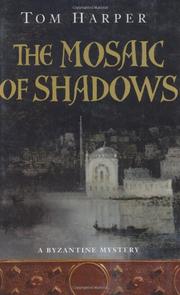 THE MOSAIC OF SHADOWS

In the waning years of the Byzantine Empire, a onetime mercenary and bounty hunter seeks the assassin who attempted to kill the emperor.

Demetrios the Apokalyptor is not your typical private eye. He’s a widower with a pair of smart, sarcastic daughters and not much in the way of a sense of humor, and he lives in Constantinople, circa 1096. But Harper, a student of medieval history at Oxford, gives him a first-rate debut. When a high-ranking eunuch Imperial advisor wants to know who took a shot at the emperor with a crossbow, he hires the Apokalyptor, his reputation burnished by years as bounty hunter and general problem-solver. By his side is Sigurd and his henchmen, a band of fierce Varangians (actually Celts from England, recently conquered by the Normans) itching for a fight with the partly Norman barbarian army closing in on Constantinople. Like most private eyes, Demetrios knows his city like the back of his hand; he can scour the place from the royal palace to the teeming markets and the foul roadsides where mercenaries and whores ply their trade. Harper resists the urge to stop the plot dead for lectures on the time and its curious geopolitical and religious entanglements. While the mystery can be ho-hum—Demetrios depends more on luck than deduction—plenty of drama is supplied by the invaders massing outside the city gates and the possibility of traitors inside the palace.

A solid beginning for what could be a rewarding series.