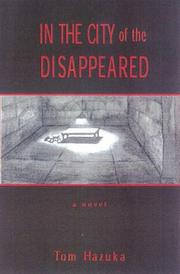 IN THE CITY OF THE DISAPPEARED

Will romantic love keep a 23-year-old Peace Corps volunteer in a country where soldiers will beat him—or worse—for the slightest provocation? That’s the $64,000 question in this somewhat shallow treatment of Chilean life under Pinochet’s savage regime.

Harry Bayliss arrives in 1978 Chile armed for his ordeal with only fluent Spanish and a good batting average. The onetime minor-league player plans to while away a year in tropical climes, teaching baseball to underprivileged children. His naïve vision is shattered, however, during his first confrontation with soldiers. They spit on him and, when he objects, threaten to take him in for `interrogation.` Harry’s eyes open even further when he ventures into poverty-stricken neighborhoods and meets the grief-overwhelmed families of the Disappeared—revolutionaries who are arrested, never to be heard from again. `You have to be tough to live here,` Harry announces. Such trite proclamations plague Hazuka’s second novel (The Road to the Island, 1998). The author seems more intent on dictating the reader’s reaction to his scenes than on adding character depth. He further misses his opportunity for profundity when Harry falls in love with Marisol Huerta, a former wife of one of the Disappeared. True, this twist exposes Harry more deeply to the country’s inequities—he visits a mental asylum for subversives, and a friend is assassinated. But Hazuka’s refusal to sketch Marisol’s background—it’s too painful for her to talk about—robs the story of its more personal and affecting elements. Some sentiment is stirred, at least, when Harry’s firing from the Peace Corps forces him to decide whether love for Marisol makes it worth staying in a brutal country .

A tale that deals with a worthy subject, but without the gravity and depth to tackle it in any satisfying way.