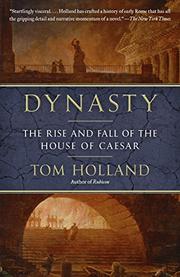 The Rise and Fall of the House of Caesar

A decade after his award-winning life of Julius Caesar (Rubicon, 2004), veteran historian Holland (In the Shadow of the Sword: The Birth of Islam and the Rise of the Global Arab Empire, 2012, etc.) delivers biographies of five descendants who ruled after his death.

This is well-trod ground for good reason: this period saw the foundation of the Roman Empire, whose emperors, after a prosperous start, revealed a distressing if entertaining tendency to self-indulgence, paranoia, and murder. Following Caesar’s assassination in 44 B.C.E., his adopted son, Octavius, won a brutal civil war to assume power. Octavius restored the facade of the old republic while a compliant Senate granted him vast authority. As Augustus, he ruled efficiently and was widely mourned upon his death in 14 C.E., having expanded the empire and begun the 200-year “pax Romana.” Several promising successors died during his long reign, and Rome was left with the sullen, reclusive Tiberius, who retired to Capri after a few years, leaving ruling to underlings and living a life of (according to later chroniclers) debauchery. The short, stormy reign of Caligula ended with him as the first emperor murdered by the Praetorian Guard, who crowned his successor, Claudius. Modern scholars have a fairly high opinion of Claudius and even of his adopted son, Nero, although the dynasty ended with widespread revolt and his suicide in 68 C.E. Holland makes liberal use of unreliable but lurid Roman sources, including Tacitus, Suetonius, Dio, and others, but he has done his homework and acknowledges modern scholars who take these with a grain of salt. The author also includes a timeline, a dramatis personae, and a family tree for the Julians and Claudians.

A vivid account of five Roman emperors, emphasizing their vices and vicious behavior with less attention to the vast empire, which continued to prosper despite them.