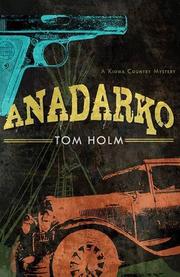 An Irish private eye and his Cherokee assistant step into a hotbed of racism and crime when they look for a missing person in Prohibition-era Oklahoma.

J.D. Daugherty, a former Chicago cop who’s set up as a PI in Tulsa, and World War I veteran Hoolie Smith, whose services he often uses, arrive in the town of Anadarko looking for Frank Shotz, a geologist who’s supposed to be securing grazing leases on Indian land but who’s more likely looking for oil or gas. After he’s nearly shot on the street while attempting to talk to two Indian men, Hoolie learns that Sheriff Wynn and Police Chief Collins are fighting over the bootlegging business in the county. Another player is Violet Comstock, who not only owns a restaurant, but has interests in hotels and a brothel and, together with the mayor, wants to force out the sheriff and chief and take over the hooch business. They offer J.D. money to create a war between the two so the governor will be forced to send in troops. As it turns out, Shotz’s mutilated body was found and buried by the Kiowa Charging Horse family, who fear they’ll be accused of his murder. The Ku Klux Klan practically runs Oklahoma, but some of J.D.’s powerful friends in the oil industry are fighting its abhorrent influence. When J.D. is called back to Tulsa to help find the kidnapped daughter of a black leader whom he met in a former case (The Osage Rose, 2008), Hoolie stays in Anadarko to sort things out. Instead, he and his friends are falsely accused of murder. Clearly, they’ll have their hands full trying to discover the shadowy figure behind all the trouble in Anadarko.

A nasty picture of how far the Klan reached into everyday life, reflections on Native American culture and religion, and a gallery of fascinating characters are all woven into a complex mystery.