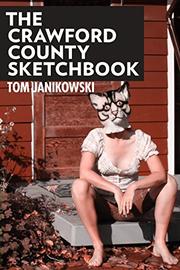 Grotesque tales of the struggle between good and evil from a dark corner of the American heartland.

Poet and surrealist Janikowski (A Martini and a Pen, 2014, etc.) does his best Faulkner impression here, using a blend of baroque Southern classicism and redneck patois to fuel a portrait of his fictional Crawford County, a character-rich settlement somewhere in the rural South. The book is composed of three primary sections. The first is devoted to the death of Peter Switchback Jr., an honorable man and local farmer who is revealed in an obituary to have died an untimely death at the age of 43. Janikowski plays out the story of Switchback’s life and death in 36 vignettes told from the point of view of various denizens of the community. These largely forgettable characters are merely here to serve as the chorus in a play in which someone is as likely to ruminate on chicken-fried steak or goings-on at the local swimmin’ hole as to give insights into horrific farming accidents or tragic suicides. The novel does offer up a genuine black-hat villain in the person of Sheriff Cecil Morgan, a “damned stupid pus-jacketed skin-eater,” whose family members play the McCoys to the Switchbacks’ Hatfields in their longtime feud. The second novella-length section, “Wild Torrent,” falls closer to Of Mice and Men (1937) with its story of an altercation between two men on a farm, one that also ends badly for everyone involved. It all wraps up with a surrealist fiction about Ashley, the virtuous woman who loved Peter Switchback and longs to rewrite his sad ending. The novel’s exaggerated portrayals, distorted narrative threads, and flamboyant brand of Southern Gothic will ring the bells of a certain literary-minded audience, but more casual readers may find it a bit rich for their tastes.

An elaborate morality play set among the cult of Southerners and their haunted landscapes.