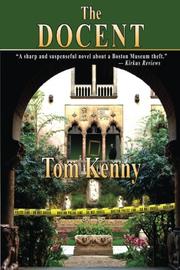 A judge, an eager young law clerk, and a museum docent find themselves caught up in one of the most notorious art heists in history in this legal thriller.

In the early morning hours of March 18, 1990, thieves broke into Boston’s Isabella Stewart Gardner Museum and made off with more than a dozen priceless works, including paintings by Vermeer, Rembrandt, and Degas, then promptly vanished. Kenny (The Morning Line, 2014) takes that infamous unsolved crime as inspiration for his second novel. Most of the action takes place more than a decade after the theft, in courtrooms and law offices around Boston. Judge Zelia Valdes is presiding over an ugly brawl between opposing sides of the powerful Theopoulis family. When the ruling doesn’t go the way the patriarch, Cosmo, hoped (he stands to lose nearly $1 billion because of the judge’s decision), his attorney, the talented, ambitious, and morally flexible Roger Metcalf, vows to make things right (“In every war the winner will lose a few battles. It’s the big picture that counts”). That means taking down Valdes, her naïve clerk Tony Cipriano, and anyone else who stands in the way. And when Metcalf’s sketchy associates start digging into Valdes’ past, they discover that the attractive widow has a strange connection to the unsolved art heist. Art buffs and thriller fans should want to plunge into this ripped-from-the-headlines effort. The author, himself a practicing lawyer, clearly knows his way around a courtroom, though he occasionally slips into legalese that might elicit yawns from the average reader. His imaginative theory about what really happened to the missing Gardner paintings is implausible and the business of uncovering the crime somewhat convoluted. A few characters—Metcalf’s wife, Jennifer, and Cosmo’s daughter Angie—are introduced early on and then unceremoniously dropped. Yet when the main players are this engaging (or in the case of Metcalf, loathsome) and the plot this zippy, these are minor quibbles. A few musings on the power of art to heal and soothe the soul are thrown in for good measure, though a bit more detail about the missing paintings that drive so much of the action would have been welcome.

A sharp and suspenseful novel about a Boston museum theft.