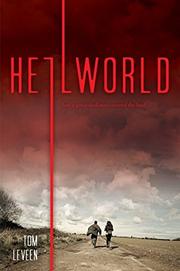 A teenage girl searches for her long-lost mom and accidentally triggers an apocalypse.

Abby Booth’s mom has been missing for five years. While hosting a popular paranormal-investigative TV series, Mrs. Booth entered a mysterious cave in Arizona and never came back. Now 16, Abby reconnects with Charlie, the son of her mother’s missing co-star, and the pair enters the cave for answers. They find their answers, but they also discover gigantic monsters that quickly escape to wreak havoc. As Abby and Charlie navigate the apocalyptic nightmare, Leveen wrestles with subjects ranging from religious historical theory to grief. Abby is a well-drawn character, action and introspection held in a nice balance. The book’s secondary characters are less captivating. Abby’s father grieves, and Charlie handsomely pouts. Charlie’s girlfriend, Selby, sparks as a combative rationalist but is absent for long stretches due to injury. The book’s structure is curious: alternating chapters between two timelines, one after the monsters are unleashed and one leading up to it. Unfortunately, once the monsters are out and about, it’s hard to be interested in the small-scale drama unfolding prior to their arrival. Regardless, the unfolding of cataclysmic events is presented in captivating fashion, making this an entertaining, if not stellar, read. Characters are not cued racially, implying a white default.

A solid thriller built on some well-meant emotional ideas.