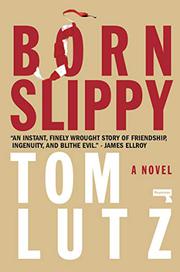 A man of modest ambitions falls under the spell of a shallow and rapacious billionaire.

Frank, when we meet him in 2000, just wants to build a high-quality house in Connecticut and start a new life after a failed relationship. Dmitry, the teenage son of distant acquaintances in England, happens to be around to help, though he’s an incompetent tradesman and his main talent is roping Frank (or “Franky,” as he calls him, much to Frank’s annoyance) into schemes redolent of prostitution and insurance fraud. Cutting the cord isn’t so simple for Frank, though: Over the dozen or so years after they meet, Dmitry pulls Frank into his orbit, be it for sleazy low-grade dalliances with women and drugs or sleazy high-stakes money laundering. “What sick shit within you responds to him?” a girlfriend asks Frank, and that’s the core question of the first novel by Lutz (And the Monkey Learned Nothing, 2016, etc.), editor of the Los Angeles Review of Books. Tonally, the novel aspires to be an intellectual thriller, heavy on the intellectual part; though the plot pivots on an explosion in 2013 that seems to have Dmitry’s hands on it, the story mainly follows Frank’s ongoing moral hand-wringing over multiple aspects of Dmitry’s life. Lutz carefully chronicles Frank’s inner storms (references to The Third Man are just one echo of Graham Greene here), though Dmitry is less resolved. Lutz alternates between making him a mere allegory of capitalist greed or an outright cartoon of it (right down to the oversized penis). “It would be a gigantic error to settle for being a capitalist pig when I can, with not an iota’s more effort, be an imperialist pig,” Dmitry declaims. The clash of sensibilities between Frank and Dmitry gives the novel a queasy frisson, though one wishes it had more to say about the mind of the pig.

An entertaining neonoir about the wages of greed.