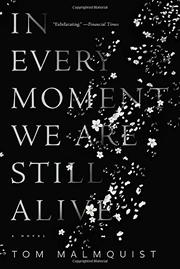 IN EVERY MOMENT WE ARE STILL ALIVE

A Swedish woman becomes deathly ill as she is about to give birth to her first child, and her longtime partner must learn to traverse parenthood and grief at the same time.

When Karin is 33 weeks pregnant and struggling to breathe, her partner and fellow writer, Tom, rushes her to a nearby hospital. Karin is diagnosed with acute leukemia, and a baby girl she names Livia is delivered by emergency C-section. Tom struggles to be present for his premature daughter as Karin becomes increasingly unresponsive over the next few weeks in the hospital. Translated from the Swedish by Koch, the first part of Malmquist’s autobiographical novel moves swiftly through hospital passages, and the days meld together in his prose. Like Tom, we are plunged into medical terminology and family tensions that build in urgency until Karin’s death. After her loss, the narrative begins to piece together memories of Tom and Karin’s life together before the illness. These sections are often untethered from each other, out of chronological order, as if fragments from a dream; it is in this part of the book that Malmquist’s background as a poet shines through, even as the heaviness of the memories is often suffocating. Tom’s efforts to care for Livia and navigate his other familial relationships are woven between these flashbacks from his courtship with Karin and her earlier health scares. Tom works through the complicated bureaucratic system to establish his legal relationship with Livia, as he and Karin weren't married; he struggles to resolve tensions with Karin’s parents due to the privacy she wanted during her illness; and his own father’s health rapidly declines after 10 years of living with cancer. By turns raw, unsettled, and touching, Malmquist's book is an extended meditation on what it means to love and to mourn.

A deeply emotional and affecting novel.